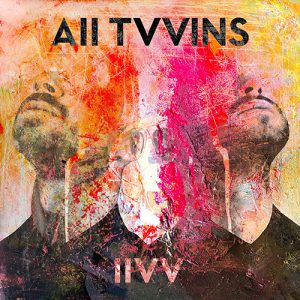 This is an album I was looking forward to for a while now: IIVV by All Tvvins.

I think it was February when I first mentioned this band on the blog. I saw All Tvvins opening for Kodaline during their spring tour and I had to find out more about them straight after the gig as they were really good and fun.

The Irish indie rock duo consists of multi-instrumentalists Conor Adams and Lar Kaye. I described their music as energetic and happy before and remember that I said that I can’t wait to hear more of them? So here finally is more.

All Tvvins debut album is called IIVV and contains ten songs full of great synths, funky guitars good vocals. Here’s my journey through all of them.

Starting off with a cheeky xylophone sound the first track Book is a good introduction to the band’s energetic sound. It’s a bit angry which is turning it into a powerful intro to the album.

The second song is Thank You, which was All Tvvins’ debut single that I really liked hearing life. It’s a catchy breakup song with good rythm, I’m just missing a bit of anger there as one would expect it according to the lyrics.

End of the Day starts slightly more electronic than the songs before and has a sound that’s a bit different to the songs before. It has another dynamic which makes it sound more structured and more diverse.

The fourth song goes by the name The Call and it’s more upbeat and has a certain drive to it which is very enjoyable. It’s the first one on the album that has lyrics that stand out and make listen up.

Too Young to Live is the one with loads of electronic guitar riffs that is drifting a little into electronica but living up to All Tvvins indie sound.

The next one is one of my favourites: Darkest Ocean. It has a great rythm, the lyrics are full of good images and vocals are soft but powerful.

These 4 Words is the latest single release taken from the album. It’s one of the more pop and cheerful songs. It’s good but for me it doesn’t really fit in. The 80’s electronica/dance touch is a bit too much.

But with Too Much Silence the band is back on track. A rocking rhythm combined with a variety of great guitars is turning the song into one of the better ones on the album.

The next song, Resurrect Me, is the catchy one that sticks in your mind with it’s chorus.

And last but certainly not least there is Unbelievable. This is the one that I featured on my Songs of the Week and as it stands it is my favourite All Tvvins song. It has a special energy and drive, the rhythm is making you dance and the sound is just great in general.

I might have had expectations that were too high, hence I was a little disappointed. I enjoyed hearing the band live so much due to all the energy they had and Unbelievable is on my “Currently Listening” list ever since it was released but this album is a bit patchy. The production is good and there are great tracks like End of the Day, Darkest Ocean and Unbelievable, but there’s also some that are lacking that special something.

Yet it’s All Tvvin’s debut album and they are quite new to the business, so there is a lot of room to improve. And nevertheless they are a very good live band and maybe everything sounds better and more energetic at a gig. You should go and see them if you get the chance.

You can stream or buy IIVV here. Feel free to let me know what you think of the album after listening. Or if you have seen All Tvvins play a gig and how it was. As you know I love hearing from you.