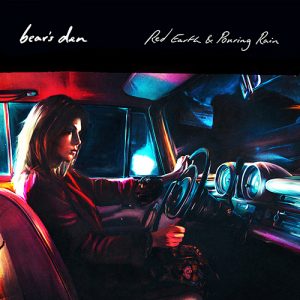 British folk/indie duo Bear’s Den (Twitter // Facebook // Website) had an album playback “party” on Facebook last Tuesday and I was there to type along my thoughts for you – here they are:
I am currently sitting here with a cherry ice pop in my hand waiting for Bear’s Den’s Facebook stream to start. I really loved their debut album Islands, hence I am really looking forward to hearing the new stuff.

As you might remember I had their first single Auld Wives of the new record on my Songs of the Week a while ago as it’s a brilliant song and I really hope the album will live up to that great sound… I am so excited to hear this album track to track now and to let you be part of it – here is my track to track commentary.

It’s time for the first song now – Red Earth & Pouring Rain. It took exactly two seconds for me to know that I will love this album. The beginning of the title track is just amazing! And the rest of it sounds great as well, I’m so glad.

“Can’t you hear it in the silence?”

And that’s the first song over already, it’s kind of cute how Andrew and Kevin look a little bit scared and anxious about how the reaction is going to be.

On to the second song Emeralds. I am loving the sound so far: a bit of 80’s synth pop, a little 90’s rock ballad as well as proper contemporary indie pop. And the next song ensues instantly. It’s called Dew On The Vine, is more  uptempo and I’m loving the guitar on it. The lyrics are quite emotional and I adore the combination of sad lyrics and slightly happy music, that turns it into a special song.

There we are three songs in and for now it sounds like the whole record is going to be great. Also, the discussion about the beards and hot temperatures problem going on right now is proof of these guys being brilliant – just a little side note.

Roses On A Breeze is the fourth song on the album and it features the sound of an oil drum which they found outside of their recording studio. The whole song is sounding mysterious and the really cute lyrics are showcased due to the construction of the song.
The next song is New Jerusalem which has a beautiful intro and outstanding lyrics (as far as I can say from listening just once).

“Love is just a word”

Speaking of love, the proximate song  is called Love Can’t Stand Alone and is according to the guys the song that rounds up the whole album and I have to agree with them. It was the song that has taken the least time to record and it seems to have a special place in the band’s heart. Love Can’t Stand Alone is a lovely ballad, very heartfelt and it’s so emotional – I might have shed a tear…

Live stream annotiation: I wasn’t the only one, the boys needed tissues as well.

And here we go, it’s time for Auld Wives, the song that I already told you about some weeks ago and I still love it – to this point it’s my favourite track of the album so far. And yes, it really is about the auld wives lifts in Scotland.

Now it’s time for the – admitted under pressure – favourite song of the band: Greenwoods Bethlehem. Seemingly, it has the “best bridge of the album” and gosh, this ong is lovely! The guitar sounds fantastic and it’s the perfect chill out song, even though it is very sentimental.

Broken Parable, the ninth track, has great drums on it – seriously. I’m normally not talking a lot about rythm and drums, but on this one, it’s certainly worth a mention.

“Though the seasons may change, love is all that remains.”

Now there’s only three songs left – I’m kind of sad it’s over already…. Fortress is the one where the sound changes a little which is exactly what the band predicted. Bear’s Den have been “messing around withe the baritone guitar” and tried different ideas. The song has a creepy start, it really sounds different and especially a little bit darker – I think I have a new favourite song!

The last two songs are linked together – how? I will tell you after my reflection on Gabriel. It is another song with a different sound. It’s more electronic, even more mysterious and has beautiful vocals on it – certainly another stunning track.

Still wondering why Gabriel and the next song have a special relationship? The guitar riff in the endof Gabriel lead to the creation of Napoleon. This one chord and some messing around lead to a special moment and a perfect transition from one song to the other. As a result these two songs show even more how everything on this album works together perfectly.

And that’s it, I loved listening to Red Earth & Pouring Rain and I can’t wait to listen again on Friday when it is officially released.

The aim of the album was, according to the band, to create a record that represents their idea of freedom and that reminds the listener of the freedom of thoughts on the road when driving along in the night and they achieved exactly that. The whole album has a smooth flow, it’s well rounded and not just a concatenation of songs – Red Earth & Pouring Rain is a very coherent and harmonious album.

Bear’s Den remain faithful to their special sound paired with thoughtful lyrics. The songwriting is amazing and I am excited to dive into the words again starting from tomorrow.