When I was ill and in bed a few weeks ago, I decided, that it’s time to watch a new series. And as I just started my Netflix subscription back then, I thought it might be a good idea to watch one of their original series, as I heard a lot of people saying they’re great.

So I started watching “Orange Is The New Black” and I got hooked. Two weeks later I had watched all two seasons and can’t wait to see the third one, when it arrives. 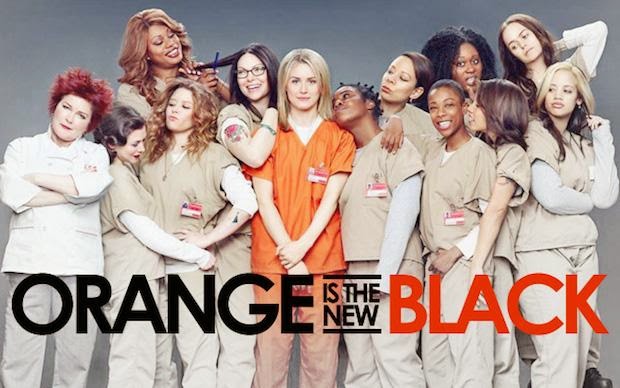 The series is about Piper Chapman, who’s bisexual and living in New York with her (male) fiancé. She’s sentenced to 15 month in a women’s prison for transporting drug money for her former girlfriend Alex Vause, an international drug smuggler. The crime happened ten years ago and by the time Piper got sentenced he already lived with her new partner in New York and had a totally different life as a manager.

At the beginning of the series she has to go to prison, let her life behind her and cope with her new environment. In the prison there are a lot of women from different social classes and with different backgrounds and things they’ve done wrong. Some of their stories get told throughout the series.
And as if it wasn’t hard enough to cope with the prison life, Alex, who revealed in trial that Piper was involved in the drug smuggling, is in the same prison too. And she struggles to keep up the relationship to her fiancé.

There’s a lot of things happening through out the so far 26 episodes. A lot of exciting, agitating, sad and shocking stories are told about all th people involved. It gets very emotional as well. And funny.

Thus there’s something in there for everyone. Except for Sci-Fi fans probably. So go and watch it, if you haven’t seen it and want to watch a new entertaining and on the same time critical series. And if you’ve seen it, tell me what you think of it in the comments.